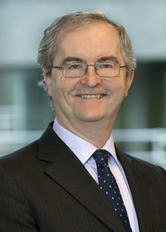 Jonathan Taylor has been a Vice President of the European Investment Bank since January 2013. He is a member of the EIB’s Management Committee which draws up the Bank’s financial and lending policies, oversees its day-to-day business, and takes collective responsibility for the Bank’s performance.

Mr Taylor has particular responsibility for the Bank’s activities in Greece, Cyprus, Ireland, the United Kingdom and Asia. He also leads the Bank’s work in climate action, and in other environmental lending policies. Internally, he is responsible for a range of control functions, such as audit, compliance and related issues. Mr Taylor was previously Director General of Financial Services and Stability at HM Treasury (the UK Finance Ministry). He has held a range of posts in both the private and public sectors. He is a graduate of the University of Oxford, in Philosophy, Politics and Economics.

All session by Jonathan Taylor

Plenary II - Partnering For Our Future